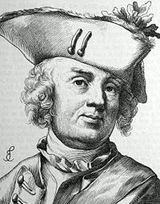 Description:
Kurt Christoph Graf von Schwerin (26 October 1684 – 6 May 1757) was a Prussian Generalfeldmarschall, one of the leading commanders under Frederick the Great.

He was born in Löwitz, Pomerania, and at an early age entered the Dutch army, with which he served at the Schellenberg and at Blenheim.

In 1707 he became a lieutenant-colonel in the army of the duke of Mecklenburg-Schwerin, and was present at Ramillies and Malplaquet, and with the Swedish commander Stenbock at Gadebusch. In 1713 he was with Charles XII of Sweden in his captivity at Bender, and in 1718 was made major-general.

In 1719 he opposed the Hanoverian army which invaded Mecklenburg (in the course of which he fought a brilliant action at Walsmühlen on 6 March 1719), and in the following year entered the service of the king of Prussia. At first he was employed in diplomatic missions, but in January 1722-1723 he received the command of an infantry regiment. In 1730, as a major-general, he was a member of the court martial which tried the crown prince Frederick for desertion, and in 1733, at the head of a Prussian army, conducted with great skill the delicate and difficult task of settling the Mecklenburg question.

In the following year he became lieutenant-general and in 1739 general of infantry. During the life-time of King Frederick William, Schwerin was also employed in much administrative work. Frederick the Great, on his accession, promoted Schwerin to the rank of general field marshal and made...
Read More