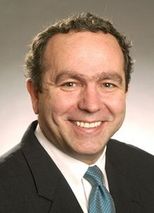 Description:
Kurt M. Campbell is an American diplomat and academic, currently serving as Assistant Secretary of State for East Asian and Pacific Affairs.

He was previously the Chief Executive Officer and co-founder of the Center for a New American Security (CNAS), a national security think tank launched in January 2007. He also served as Director of the Aspen Strategy Group and the Chairman of the Editorial Board of the Washington Quarterly, and was the founder and Principal of StratAsia, a strategic advisory company focused on Asia. Prior to co-founding CNAS, he served as Senior Vice President, Director of the International Security Program, and the Henry A. Kissinger Chair in National Security Policy at the Center for Strategic and International Studies.

On June 26, 2009, Dr. Campbell was confirmed as Assistant Secretary of State for East Asian and Pacific Affairs. He is married to Lael Brainard, the current Under Secretary of the Treasury for International Affairs, and they have three children.

Campbell served as an officer in the U.S. Navy on the Joint Chiefs of Staff and in the Chief of Naval Operations Special Intelligence Unit. He was also associate professor of public policy and international relations at...
Read More