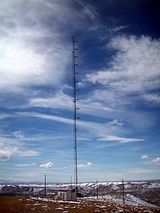 The station signed on in 1986, as the first sister station of KUGR, which had been broadcasting for ten years at the time. Like its sister stations, the station is currently owned by Wagonwheel Communications Corporation.

Music on KYCS is primarily satellite fed, which is also true to its sister stations besides KUGR. The network, known as Today's Best Hits, hosts numerous DJs throughout the day, including a morning show. The network is part of Citadel Media, formerly ABC Radio Networks.

Saturday nights feature a popular program known as "Retro Saturday Night." The number of hours this show has held has decreased from four to two in past years, though reasons for doing so are unknown. On Sunday mornings, KYCS hosts the Fox All Access Countdown, which is a weekly run down of popular top 40 songs.

KYCS celebrated its twenty first year of broadcasting in 2007.

Like its sister stations, KYCS broadcasts from a tower located on Wilkins Peak, which is just outside of Rock Springs. The 94,000 watt signal reaches into parts of northern Utah to the south. To the west, the station reaches Evanston before fading out completely. To the east, Rawlins receives fringe coverage. KYCS can be heard as far north as the Wind River mountain range. The tower for KYCS is approximately above sea level on Wilkins Peak.