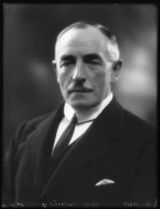 Sir Kynaston was the eldest but the last of the famous three Studd Brothers who captained Cambridge in consecutive seasons who also later gained high renown in his other walks of life before his death on January 14, 1944.

At Eton, Kynaston was never on the losing side in the needle matches against Harrow and Winchester. In 1879 Kynaston went up to Cambridge and was four years in the XI without ever excelling in the annual University match; things moved on in 1882 when he and his brothers took an important role in defeating by six wickets the great...
Read More