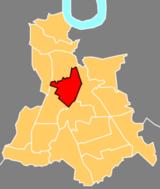 
Ladywell is a district of south London, England, located in the London Borough of Lewisham.

The name Ladywell was in use by the 15th century, and maps dating to this period show the site of the original Ladywell, in front of the area later to be occupied by the Freemason's Arms (now 'Masons') and Ladywell railway station. The well was six to seven feet deep and surrounded by an iron railing. It is thought to have been dedicated to the Virgin Mary. It was covered over in the mid-18th century as part of the construction of sewer works. The coping stones of this well were later uncovered during work to underpin the railway bridge, and rescued by a signalman. In 1896 they were incorporated as part of the fountain that stood in the grounds of the Ladywell Public Baths, a local landmark built in red brick in 1884.

Another well is located nearby at what is now 148 Ladywell Road. This was a mineral spring, the waters of which local people drank for medicinal purposes.

Much of the development of Ladywell occurred in the late-19th century following the opening of Ladywell railway station in 1857.

Ladywell House was the vicarage built in 1693 for Dean George Stanhope, the vicar of Lewisham and Deptford. Stanhope was a friend of the writer Jonathan Swift,Journal to Stella, Chelsea, June 30, 1711,...
Read More