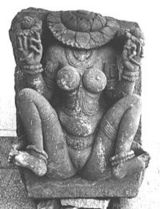 Description:
Lajja Gauri is a goddess associated with abundance and fertility, and she has been euphemistically described as Lajja (that is, modesty).

Early depictions of Lajja Gauri in Shaktism cults were found in the Indus Valley deals, though her later depiction dates to the 1-3rd century, and her worship is prevalent in the Deccan, a region of the Indian subcontinent.

Her fertility aspect is emphasized by symbolic representation of the genitals, Yoni or the Womb, as blooming Lotus flower denoting blooming youth in some cases and in others through a simple yet detailed depiction of an exposed vulva. Added to the fact that she is sitting in a squatting position (uttanpada) with legs open, as in during childbirth, in some cases, the right foot is placed on a platform to facilitate full opening. She is invoked for abundant crops (vegetative fertility) and good progeny. A blossoming lotus replaces her head and neck, an icon often used in Tantra. The seven Chakras of human energy anatomy are often depicted as blossoming lotuses, and Sri or Lakshmi is often depicted in her Sri Yantra as a Yoni, shown as a simplified triangle at the centre. Further, most fertility goddesses of the Ancient world are similarly shown headless, while giving prominent focus to the genitals. The arms of the goddess are bent upwards, each holding a lotus stem, held at the level of the head again depicted by the matured lotus flower.

Owning to an...
Read More