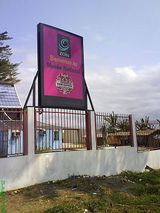 Description:
The official language of Gabon is French, while 32% of the people speak Fang as a mother tongue. French is the medium of instruction. Before World War II very few Gabonese learned French, nearly all of them working in either business or government administration. After the war, France worked for universal primary education in Gabon, and by the 1960-61 census, 47% of the Gabonese over the age of fourteen spoke some French, while 13% were literate in the language. By the 1990s, the literacy rate had risen to about 60%.

A small percentage, several thousand in number, have had secondary or higher education and are extremely fluent in French. It is estimated that 80% published by the Organisation internationale de la Francophonie. Nathan, Paris, 2007. More than 10,000 French people live in Gabon, and France predominates the country's foreign cultural and commercial influences.

The indigenous languages are all members of the Bantu family, estimated to have come to Gabon about 2,000 years ago, and differentiated into about 40 languages. They are generally spoken but not written; while missionaries from the United States and France developed transcriptions for a number of languages based on the Latin alphabet starting in the 1840s, and...
Read More