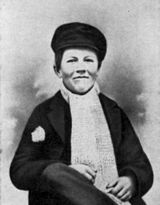 Description:
A late bloomer is a person whose talents or capabilities are not visible to others until later than usual. The term is used metaphorically to describe a child or adolescent who develops more slowly than others in their age group, but eventually catches up and in some cases overtakes their peers, or an adult whose talent or genius in a particular field only appears later in life than is normal - in some cases only in old age.

"Late Bloomer" is commonly used to refer to young children who develop skills such as language, reading or social interaction later than others of their age.

There are many theories of the way in which children develop, proposed by authorities such as Urie Bronfenbrenner, Jerome Bruner,Bruner, J. S. & Goodman, C. C. (1947). Value and need as organizing factors in perception. Journal of Abnormal Social Psychology, 42, 33-44. Erik Erikson, Jerome Kagan, Lawrence Kohlberg, Jean Piaget and Lev Vygotsky. Although they disagree about how stages of development should be defined, and about the primary influences on development, they agree that a child's development can be measured as a predictable series of advances in physical,...
Read More