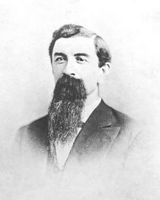 He was born in Anson County, North Carolina. L.L. Polk fought in the American Civil War for the Confederate States of America, and was wounded at the Battle of Gettysburg.

Returning to North Carolina after the war, Polk founded the town of Polkton, incorporated in 1875, where he started a weekly newspaper called The Ansonian. Through it he advocated for farmers and for the Grange movement. Polk, a distant relative of President James K. Polk, became active in state politics, serving in the North Carolina House of Representatives and as a delegate to the state constitutional convention in 1865-66. In 1877, he was appointed the first North Carolina Commissioner of Agriculture and served until 1880. An agricultural collection he established as Commissioner was the basis for what became the North Carolina Museum of Natural Sciences.

Polk returned to journalism by founding the Progressive Farmer in 1886 in Winston. The magazine is still published to this day. At first, the paper's primary aim was to teach new agricultural methods, but soon it also focused on politics.

Meanwhile, Polk was also active in the Baptist church, once serving as president of the North Carolina Baptist State Convention. Polk was instrumental in establishing the North Carolina Agricultural and Mechanical College and Baptist Female University.

In the late...
Read More