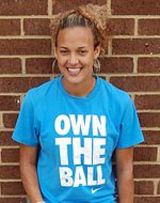 Description:
Lianne Joan Sanderson (born 3 February 1988) is an English football who plays for the WPS side Philadelphia Independence as a striker.

Sanderson joined Arsenal in 1997 as part of their youth programme. Her first full season with the first team came in the 2003&ndash;2004 season, and she continued to play in the first team from then on. In the 2006 FA Women's Cup final, Sanderson scored the fifth goal of a 5&ndash;0 win over Leeds United, and was voted Player of the Match.

Sanderson finished the 2006&ndash;07 season as Arsenal's top&ndash;scorer, with 40 goals scored in 41 appearances across four competitions, all of which were won by Arsenal. In the 2007&ndash;08 season, she amassed 51 goals in 36 appearances, including the third in Arsenal's 4-1 FA Women's Cup final triumph over Leeds United.

On 3 July 2008, it was announced that Sanderson and Arsenal team mate Anita Asante had joined Chelsea Ladies. Upon signing Sanderson said "I always said I would never play for anyone else other than Chelsea. I have been at Arsenal for 11 years and it is a big change for me to have to leave the team, but both Anita and I wanted a new challenge. Sometimes you have to try new things and challenge yourself personally and I know that is what I am looking forward to doing here. So now I am just looking forward to what's ahead. Hopefully Anita and I will come in and help Chelsea win things."

Sanderson was drafted in the WPS international draft, and now...
Read More