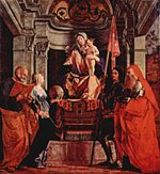 Another St. Liberalis was bishop of Embrun from 920-940. He died in 940 at Brive, his birthplace. It is also another name for Saint Eleutherius, venerated with Saint Antia.

Saint Liberalis of Treviso () is a saint of the 4th century. Tradition states that he was a priest who opposed Arianism and who worked to convert Arians and that he was persecuted at Ancona.

A legend, composed around the 10th century and incorporating elements from other saints’ hagiographies, states that Liberalis was a native of Altinum, born to a noble equestrian family. According to the legend, he was educated in the Christian faith by Heliodorus of Altino (Eliodoro), first Christian bishop of the city. Liberalis practiced extreme mortifications and fasts after his conversion.

Faced with growing opposition from both Arianism and paganism in the see, Heliodorus retired as bishop and lived as a hermit on a desert island in the lagoons near Altino, entrusting the see to a man named Ambrose. Worried about Ambrose’s ability to handle the rise of Arianism in the see, Liberalis decided to look for Heliodorus and attempt to convince him to come back to his see. On the way, Liberalis fell asleep in a church and experienced a strange dream, in which a angel, resplendent in white, encouraged...
Read More