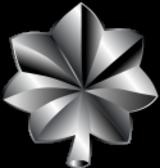 Please see "Lieutenant Colonel" for other countries which use this rank

The pay grade for the rank of Lieutenant Colonel is O-5. The insignia for the rank consists of a silver oak leaf, with slight stylized differences between the Army/Air Force version and the Navy/Marine Corps version.

During the 19th century, lieutenant colonel was often a terminal rank for many officers, since the rank of "full colonel" was considered extremely prestigious reserved only for the most successful officers. Upon the outbreak of the Civil War, the rank of lieutenant colonel became much more common and was used as a "stepping stone" for officers who commanded small regiments or battalions and were expected, by default, to be promoted to full colonel once the manpower of a regiment grew in strength. Such was the case of Joshua Lawrence Chamberlain, who...
Read More