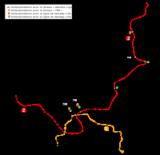 Description:
The Lille metro () is a driverless metro in and around Lille, France. The system was inaugurated on 25 April 1983 and was the first to use VAL (, ) system.

The metro forms part of a mixed mode public transport system, combined with buses and trams operated under the Transpole brand and covering the Lille metropolitan area.

Construction started in 1978 and the first line was inaugurated on 25 April 1983 between the stations 4 Cantons and République. One year later, on 2 May 1984 the entire line 1 was opened (13.5&nbsp;km long, 8.5&nbsp;km underground). The metro links the station CHR B Calmette to 4 Cantons via Gare de Lille Flandres, with 18 stations altogether on the line. All stations have doors between the platform and the train.

Trains are only 2 metres wide and 26 m long (two linked cars), and are rubber-tyred. There are 60 stations which go as far as the Belgian border. The metro platforms are 52 m long, long enough for two units. One unit can carry 156 passengers.

The metro operates from 5:00 until midnight, with trains every 1.5 – 4 minutes (1 min. during rush hour), and every 6 – 8 minutes early mornings and evenings. On Sundays there is a train every 4 – 6 minutes. A one-way ticket costs €1.40.http://www.transpole.fr/tickets-carnets/tarifs/ticket-unitaire-1111.aspx...
Read More