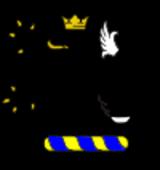 Description:
The lion is a common charge in heraldry. It traditionally symbolises bravery, valour, strength, and royalty, since traditionally, it is regarded as the king of beasts.

As many attitudes (positions) now exist in heraldry as the heraldist's imagination can conjure, as a result of the ever-increasing need for differentiation, but very few of these were apparently known to medieval heralds. One distinction commonly made (especially among French heralds), although it may be of limited importance, is the distinction of lions in the walking positions as leopards. The following table summarizes the principal attitudes of heraldic lions:

Other terms are used to describe the lion's position in further detail. It should be noted that each coat of arms has a right and left (i.e. dexter and sinister) side - with respect to the person carrying the shield - so the left side of the shield as drawn on the page (thus the right side to the shield bearer) is called the dexter side. The lion's head is normally seen in agreement with the overall position, facing dexter (left) unless otherwise stated. If a lion's whole body is turned to face right, he is to sinister or contourné. If his whole body faces the viewer, he is affronté. If his head only faces the viewer he is guardant or gardant, and if he looks back over his shoulder he is regardant. These adjectives follow any other...
Read More