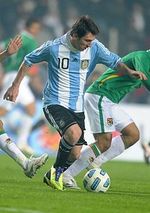 Description:
<!-- Please do not add "Cuccittini" Argentine names are usually not compound, and in this specific case it is not used at all. Please don't add, it will be removed. -->

Lionel Andrés "Leo" Messi (; born 24 June 1987 in Rosario) is a football player who currently plays for FC Barcelona and the Argentina national team as a striker or winger. Considered one of the best football players of his generation, Messi received several Ballon d'Or and FIFA World Player of the Year nominations by the age of 21, and won in 2009 and 2010. His playing style and ability have drawn comparisons to Diego Maradona, who himself declared Messi as his "successor".

Messi began playing football at a young age and his potential was quickly identified by Barcelona. He left Rosario-based Newell's Old Boys's youth team in 2000 and moved with his family to Europe, as Barcelona offered treatment for his growth hormone deficiency. Making his debut in the 2004–05 season, he broke his team record for the youngest footballer to score a league goal. Major honours soon followed as Barcelona won La Liga in Messi's debut season, and won a double of the league and Champions......
Read More