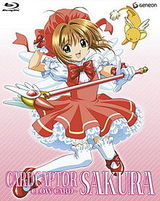 Description:
The 70-episode Cardcaptor Sakura Japanese anime television series is based on the manga series written and illustrated by the manga artist group Clamp. The episodes, spread over three seasons, are directed by Morio Asaka and animated and produced by Madhouse. Art direction is handled by Katsufumi Hariu and character design is done by Kumiko Takahashi. The series composition was written by Nanase Ohkawa of Clamp, who also scripted most of the episodes. Other scriptwriters include: Hiroshi Ishii, Jiro Kaneko, Tomoko Ogawa, and Tomoyasu Okubo. The music is composed by Takayuki Negishi, with sound direction by Masafumi Mima. The series focuses on Sakura Kinomoto, a fourth grade elementary school student who discovers that she possesses magical powers after accidentally freeing a set of magical cards from the book in which they had been sealed for years. She is tasked with retrieving those cards in order to avoid an unknown catastrophe from befalling the world.