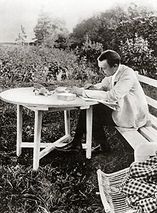 Description:
The compositions of Sergei Rachmaninoff (1873&ndash;1943) cover a variety of musical forms and genres. Born in Russia, he studied at the Moscow Conservatory with Nikolai Zverev and Anton Arensky, and while there, composed some of his most famous works, including Prelude in C sharp minor (Op. 3, No. 2), and his first piano concerto (Op. 1). His Symphony No. 1 (Op. 13) was one of his first compositions as a "Free Artist" after graduation, and subsequently his first critical failure. The derision he received sent him into depression. After being sent through autosuggestive therapy, he composed his second piano concerto (Op. 18), which is still part of the major orchestra repertoire today. In 1909, he made his first tour of the United States, and composed Piano Concerto No. 3 (Op. 30), notable for its difficult cadenza. After this, due to migration from Russia in 1917 and his busy concert career, his output as a composer decreased, and during this period, he completed only six compositions. His last work, Symphonic Dances (Op. 45), was completed in 1940.