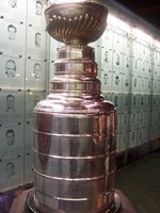 Description:
The Stanley Cup is an ice hockey club trophy, awarded annually to the National Hockey League (NHL) playoffs champion at the conclusion of the Stanley Cup Finals. It was donated by former Governor General of Canada Lord Stanley of Preston in 1892, and is the oldest professional sports trophy in North America. Originally inscribed the Dominion Hockey Challenge Cup, the trophy started out as an award for Canada's top-ranking amateur ice hockey club in the Amateur Hockey Association of Canada. In 1915, the two professional ice hockey organizations, the National Hockey Association (NHA) and the Pacific Coast Hockey Association (PCHA), reached a gentlemen's agreement in which their respective champions would face each other for the Stanley Cup. After a series of league mergers and folds, it became the de facto championship trophy of the NHL in 1926. The Cup later became the de jure NHL championship prize in 1947.

Since the 1914–15 season, the trophy has been won a combined 95 times by 17 active NHL teams and five defunct teams. Prior to that, the challenge cup was held by nine different teams. The Montreal Canadiens have won the Stanley Cup 24 times and made the finals an additional nine times. There were two years when the Stanley Cup was not awarded: 1919, because of a Spanish flu epidemic, and 2005, because of the NHL lockout.

The origins of the Challenge era come from the method of play...
Read More