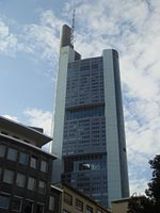 Description:
This lists ranks skyscrapers in the European Union by height. Since 1997, the tallest building in the EU has been Commerzbank Tower, Frankfurt, Germany at 259m, despite this two buildings currently under-construction in London, United Kingdom will exceed this height upon completion in 2012/2013 (Shard London Bridge and Bishopsgate Tower).

This lists ranks skyscrapers in the European Union that stand at least tall, based on standard height measurement. This includes spires and architectural details but does not include antenna masts. Existing structures are included for ranking purposes based on present height. This list includes under construction buildings that have already been topped out.

This lists buildings that are under construction in European Union and are planned to rise at least . Approved or proposed buildings are not included in the table.

Timeline of tallest buildings in EU is following. European Economic Community is considered as direct predecessor of EU.

Some skyscraper enthusiasts prefer this measurement, claiming that the extensions that can or cannot be deemed "architectural" are subjective. However, many non-architectural extensions (such as radio antennas) are easily added and removed from tall buildings without significantly changing the style and design of the building, which is seen as a significant...
Read More