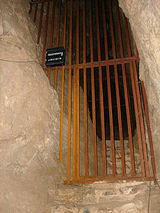 Description:
"Little Foot" is the nickname given to an extraordinarily complete fossil hominin skeleton found in 1994–1998 in the cave system of Sterkfontein, South Africa.

The original Little Foot specimens were found by paleoanthropologist Ronald J. Clarke in 1994, while searching through boxes of fossil fragments labelled 'Cercopithecoids' at the site of Sterkfontein. These fragments came from the Silberberg Grotto, a large cavern within the Sterkfontein cave system. He spotted four left foot bones (the talus, navicular, medial cuneiform and first metatarsal) that were unmistakably hominin and most likely from the same individual. They were described as belonging to the genus Australopithecus, and catalogued as Stw 573.

Due to the diminutive nature of the bones, they were dubbed "Little Foot". Dr. Clarke found further foot bones from the same individual in separate bags in 1997, including a right fragment of the distal tibia that had been clearly sheared off from the rest of the bone. Two fossil preparators and assistants of Dr. Clarke, Stephen Motsumi and Nkwane Molefe, were sent to the Silberberg Grotto to try and find the matching piece of tibia that attached to this fragment. Amazingly, within two days they found the remaining part of the bone protruding from the rock in the lower part of...
Read More