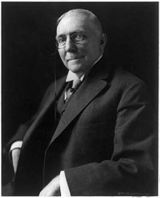 Description:
"Little Orphant Annie" is an 1885 poem written by James Whitcomb Riley and published by the Bowen-Merrill Company. First titled "The Elf Child", Riley changed the name to "Little Orphant Allie" at its third printing, however a typecasting error during printing renamed the poem to its current form. Known as the "Hoosier poet", Riley wrote the rhymes in nineteenth century Hoosier dialect. As one of his most well known poems, it served as the inspiration for the character Little Orphan Annie upon whom was based a comic strip, plays, radio programs, television shows, and movies.

The subject was inspired by Mary Alice "Allie" Smith, an orphan living in the Riley home during his childhood. The poem contains four stanzas; the first introduces Annie and the following three are stories she is telling to young children. The stories each tell of a bad child who is snatched away by goblins as a result of their misbehavior. The underlying moral and warning is announced in the final stanza, telling children that they should obey their parents and be kind to the unfortunate, lest they suffer the same fate.

James Whitcomb Riley was a poet who achieved national fame in the United States during late nineteenth and early twentieth century. "Little Orphant Annie" is one of Whitcomb's most well known poems. Originally published in the Indianapolis Journal on November 15, 1885 under the title "The...
Read More