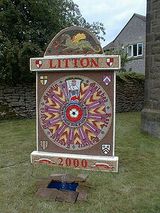 Description:
Litton is a village in the Derbyshire Peak District of England. It is one mile from Tideswell and six miles from Bakewell.

The locals will tell you "It's 1000 feet up - minus a boy scout". It has a village hall, a village shop, a small primary school, a post office run by a co-operative of villagers and the Red Lion pub. There are two churches, one at the east end of the village, and one at the west, at the outskirts of the village on the road to Tideswell, the next village along.

Litton has one of the Derbyshire well dressings that take place each summer. The display is set on a base of moist clay and the patterns formed from petals, seeds, mosses and lichens. Each village has its own distinctive style of decoration.

When it was first classed as a village in the late 18th century there were only a few houses on the outskirts of Tideswell. Later on, however, a lead mine was built near Peter's Rock. An obelisk-style cross shaft lies atop steps on the village green.Neville T. Sharpe, Crosses of the Peak District (Landmark Collectors Library, 2002)

This was the birthplace in 1628 of William Bagshaw, the celebrated Nonconformist divine called the “Apostle of the Peak”."