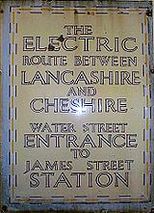 Description:
James Street (full name Liverpool James Street) is a railway station located in the centre of Liverpool, England, and situated on the Wirral Line of the Merseyrail network. James Street is an underground station; access is via lift from James Street and, at peak times, via a tunnel from the India Buildings on Water Street.

The station opened as the original terminus of Mersey Railway Tunnel in 1886. In 1892 the tunnel was extended to Liverpool Central station. By this time, there were trains from Liverpool to Birkenhead Park and Rock Ferry stations in Birkenhead. The line was electrified in 1903. Through trains to West Kirby and New Brighton commenced in 1938, when the former Wirral Railway routes were electrified. There were originally two platforms, either side of a twin-track tunnel.

In the 1970s, the station was rebuilt as part of the expansion of the Merseyrail network. A new single-track tunnel known as the Loop was constructed, from the Mersey Railway Tunnel via a new third platform at James Street, then Moorfields, Liverpool Lime Street and Liverpool Central, rejoining the Mersey Railway just to the east of James Street. This opened in 1977. Part of the original tunnel between Liverpool Central and James Street was used by the new Northern Line. The remaining part of that tunnel which is used by neither the Wirral Line nor Northern Lines was retained, to provide a connection between the two for moving empty electric trains...
Read More