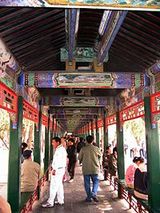 Description:
The Long Corridor () is a covered walkway in the Summer Palace in Beijing, China. First erected in the middle of the 18th century, it is famous for its length (728 m) in conjunction with its rich painted decoration (more than 14,000 paintings).

The Long Corridor leads from the Gate for Greeting the Moon (Yao Yue Men) in the east westwards along the northern shore of Kunming Lake. Along its entire length, it keeps to the transitional zone between the lake shore and the foot of the Longevity Hill, which is on the opposite side of the corridor. The Marble Boat, a landmark lakeside pavilion, is located near the western end of the corridor. The middle section of the Long Corridor passes in a southward bend around the central building complex on the lake side of Longevity Hill, The main hall in this complex is the Cloud-Dispelling Hall (Pai Yun Dian), where the Empress Dowager Cixi used to celebrate her birthday. The Long...
Read More