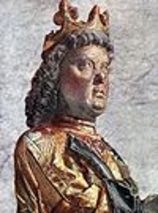 Description:
The Lord High Constable (Swedish: Riksmarsk or only Marsk) was a prominent and influential office in Sweden, from the 13th century until 1676, excluding periods when the office was out of use. The office holder was a member of the Swedish Privy Council and, from 1630 and on, the head of the Swedish Council of War. From 1634, the Lord High Constable was one of five Great Officers of the Realm.

In a letter from 1268, during the reign of Valdemar Birgersson, the title marscalcus of the king is mentioned. The holder of the prestigious title is a nobleman, but it is not possible to decide much about the assignments belonging to it. It is possible that the marsk, or the constable, replaced the stabularius that previously governed the king's mounted following.

Constable Torgils Knutsson was the foremost among the powerful men that ruled Sweden during the childhood of king Birger Magnusson in the late 13th century. Later constables seem to only occasionally be called upon by the king, without having regular tasks to fulfill. Queen Margaret, who tried to reclaim power that previous kings had lost, chose to have neither a Lord High Constable nor a Lord High Steward. Her successor Eric of Pomerania was forced by the Swedish noblemen to appoint a constable. Thus, in 1435, Karl Knutsson Bonde, a future Swedish king, became the first constable for quite some time. In a suggestion to a treaty of the Kalmar......
Read More