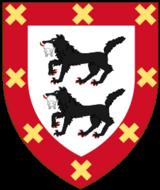 Description:
Lord of Biscay (, ) is a historical title of the head of state of the autonomous territory of Biscay, Basque Country.

The first known Lord of Biscay (11th century), Íñigo López "Ezkerra" was a lieutenant of the Kingdom of Pamplona (later known as Navarre), and this was until the Castilian conquest of Gipuzkoa in 1200. The relations of the lords with the kings of Castille made them the landlords of Haro, La Rioja because they had favored the Castilian interests in the conflicts with Pamplona/Navarre.

The Lords had limited powers and had, like the Navarrese monarchs before them, to give oath at Gernika of respecting the fuero (Basque: forua) when inheriting the honor.

After the Lordship was inherited by the Castilian dynasty in 1370, the Kings of Castile and later Spain still have to give oath in equal manner, even after the Biscayan fueros were unilaterally supplanted in the 19th century as a retaliatory measure from Madrid for the support of the provinces to Carlist pretender to the Crown.<!-- Is it still required. -->.