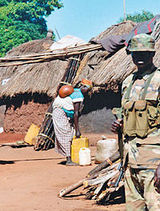 Description:
The period from 2000 to 2006 of the Lord's Resistance Army insurgency in northern Uganda begins with the assault of the Uganda People's Defence Force (UPDF) upon LRA strongholds in South Sudan. This in turn led to a series of retaliatory attacks by the Lord's Resistance Army of an intensity not seen to since the mid-1990s. International awareness of the conflict gradually grew and in September 2005, the International Criminal Court issues warrants for the arrest of senior LRA commanders, including Joseph Kony.

In March 2002, the UPDF launched a massive military offensive, named "Operation Iron Fist", against the LRA bases in southern Sudan. The National Islamic Front government agreed to the entry of the Ugandan military into its borders, albeit below the so-called "red line" consisting of the Juba-Torit highway. This was part of its efforts to broadcast its new status as an engaged member of the international community. This agreement, coupled with the return of Ugandan forces that had been deployed in the Democratic Republic of Congo upon the official end of the Second Congo War, created what the Ugandan government felt was an ideal situation in which to end a conflict that had become both an embarrassment and political liability., IRIN PlusNews, 27 May 2002

This attempt at a heroic finish to the conflict failed in a spectacular manner. After several months of uncertainty, LRA forces...
Read More