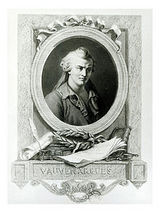 He was born in Aix-en-Provence. His family was poor though noble; he was educated at the college of Aix, where he learned little—neither Latin nor Greek—but by means of a translation acquired a great admiration for Plutarch. He spent his youth at the Chateau of Vauvenargues, the family seat.

He entered the army as sub-lieutenant in the king's regiment, and served for more than ten years, taking part during the War of the Polish Succession in the Italian campaign of Marshal Villars in 1733, and in the disastrous expedition to Bohemia in support of Frederick II of Prussia's designs on Silesia, in which the French were abandoned by their ally.

There, in 1740, he met and fell in love with Paul Hippolyte Emmanuel de Seytres. De Seytres died two years later, during the Siege of Prague in 1742, at the age of seventeen. De Clapiers addressed his philosophical work Conseil à un jeune homme (Advice to a young Man) to his young beloved. He also wrote a funeral eulogy for him, a work which he considered to be among the most important of his life, and which he continued to polish until his death. Vauvenargues discusses in his writings his hate of women and his love of young men, which he defends as having nothing against nature, and blames "malicious...
Read More