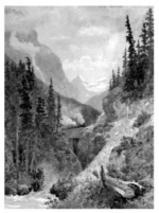 Lucius O'Brien was born in Shanty Bay, Ontario, a village his father founded on the shore of Lake Simcoe.

He graduated from Upper Canada College in 1847 and is said to have directly started work in an architect's office where he did drafting. In 1852, he won two prizes at the Ontario Provincial Exhibition for painting. In 1856, he was listed as an artist in Toronto's City Directory.

In 1872, Lucius began landscape painting, and quickly excelled in the genre. Two year later, after a dispute with artist John Arthur Fraser, O'Brien took Fraser's position as Vice-President of the Ontario Society of Artists, a position he held until 1880, when he became founding President of the Royal Canadian Academy of Arts.

He is best known for landscape paintings from across Canada in oil and watercolour, such as, Sunrise on the Saguenay of 1880, which was the first academy diploma piece in the Royal Canadian Academy's first annual exhibition.

In 1880, O'Brien began to work on Picturesque Canada (1882–84), which he edited. O'Brien toured across Canada, meeting with the country's artists and commissioned artists to produce woodblock prints for illustration of the...
Read More