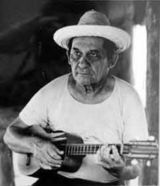 Description:
Luis Mariano Rivera was born on August 19, 1906, in the valley of Canchunchú, in the Sucre State of Venezuela. He was known not only as a singer, but also as a composer, poet and dramatist.

A self-taught musician and a man of few words, but possessing great sensitivity, Rivera used to say that his first encounter with music was by pure chance. “It was in December. My friends wanted to sing a new parranda but they had no idea where to start, so I wrote a song for them: “Canchunchú Florido”. With this I began as composer.” After “Canchunchú Florido”, Rivera wrote “Cerecita”, “El Mango”, “Cundeamor”, “Carúpano Tierra Mía”, “La Guacara”, and “Mi Comay Juana Maria” and hundreds of songs that have been interpreted by musicians such as Morella Muñoz, Jesús Sevillano, Gualberto Ibarreto, Juan Carlos Salazar, Cecilia Todd, Lilia Vera and Simón Díaz, and groups such as Serenata Guayanesa and Un Solo Pueblo.

Biographer Rafael Salazar wrote in his book “Luis Mariano Rivera, Poet and Singer of Express Canchunchú”: “Few popular poets and musicians have had the privilege to be recognized by so many people, regional and national institutions”. Luis Mariano Rivera died on March 15, 2002.