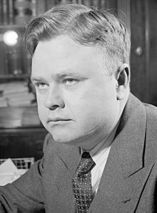 Description:
Lyle Hagler Boren (May 11, 1909-July 2, 1992) was a U.S. Democratic Party politician and a member of the United States House of Representatives from Oklahoma, serving from 1937 to 1947 and was defeated for renomination in 1946.

Boren attracted national attention for his criticism of The Grapes of Wrath. He was active in state politics long after leaving the U.S. Congress and is the father of an Oklahoma governor and the grandfather of U.S. Rep. Dan Boren.

He was born near Waxahachie, Texas, and moved to Lawton, Oklahoma in 1917, where he attended public schools. He finished high school in Choctaw, Oklahoma graduating from Choctaw High School, where the activities center now bears his name. Boren was graduated from East Central College at Ada, Oklahoma, in 1930. From 1930 to 1935, he was a school teacher in Wolf, Oklahoma, and later served as a deputy procurement officer for the United States Department of the Treasury. Furthermore, he was involved in agricultural and mercantile business interests. He married the former Christine McKown, an Oklahoma State University graduate and public school teacher, in 1936.<ref...
Read More