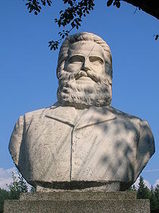 Description:
Lyuben Stoychev Karavelov () (c. 1834 - 21 January 1879) was a Bulgarian writer and an important figure of the Bulgarian National Revival.

Karavelov was born in Koprivshtitsa. He began his education in a church school, but in 1850 he moved to the school of Nayden Gerov in Plovdiv. He was then sent by his father to study in a Greek school for two years, before transferring to a Bulgarian school, where he also studied Russian literature. He moved to Odrin for an apprenticeship, but he soon came back to Koprivshtitsa and was sent to Constantinople in 1856. There he developed a strong interest in politics and the Crimean War. At the same time, he studied the culture and ethnography of the region.

In 1857, Karavelov enrolled in the Faculty of History and Philology at the University of Moscow, where he fell under the influence of Russian revolutionary democrats, was placed under police surveylance in 1859, and took part in student riots in 1861. With a group of other your Bulgarian student radicals, he published a journal and started writing poetry and long short stories in Bulgarian, scholarly publications in Bulgarian ethnography and journalism in Russian. In 1867 he went to Belgrade as a correspondent for Russian newspapers, started publishing prose and journalism in Serbian, in 1868 was forced to move to Novi Sad, Austria-Hungary, for his contacts with the Serb opposition (led by Svetozar Marković), was arrested and spent time in a Budapest prison for alleged participation in...
Read More