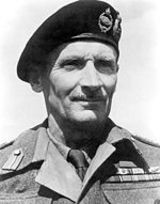 Description:
Meyrick Edward Clifton James (1898 - 8 May 1963, Worthing, England) was an actor and soldier, notable for his resemblance to Field Marshal Bernard Montgomery.Obituary Variety, 15 May 1963. This was used by British intelligence as part of a deception campaign in 1944.

Clifton James was born in Perth, Australia, the youngest son of notable Australian public servant John Charles Horsey James, and his wife Rebecca Catherine Clifton. After serving in World War I he took up acting and at the outbreak of World War II volunteered his services to the British Army as an entertainer. Instead of being assigned to ENSA as he had hoped, Clifton James was commissioned into the Royal Army Pay Corps in 1940 and eventually posted to Leicester. Here, his acting seemed to be limited to his membership of the Pay Corps Drama and Variety Group.

About seven weeks before D-Day in 1944, a British Lieutenant-Colonel, J.V.B. Jervis-Reid, noticed Clifton James's resemblance to Montgomery while he was reviewing photographs in a newspaper; James, it seemed had 'rescued' a failing patriotic show by appearing in it, quite briefly, as 'Monty.' MI5 decided to exploit the resemblance to confuse German intelligence. James was contacted by Lieutenant-Colonel David Niven, who worked for the Army's film unit, and was asked to come to London on the pretext of...
Read More