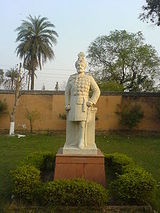 The Maharajas of Patiala were awarded 17 gun salutes.

Following is the list of Maharajas of Patiala in order of their accession to the throne:

The most famous Maharaja of Patiala was Maharaja Bhupinder Singh (12 October 1891 &ndash; 23 March 1938). He is perhaps best known for his extravagance, and for being a cricketer. His polo and cricket teams were one of the best in India Two of his sons, Maharajadhiraj Yadavindra Singh and Raja Bhalindra Singh, both played first-class cricket. Yuvraj played in one Test for India, in 1934.

Maharaja of Patiala was also known as the owner of the highest cricket ground in Chail and the first Indian to own a car and an aircraft.

Maharaja of Patiala was also considered as leader of the Sikhs and masses of Punjab before independence. When during rainy season a seasonal river bordering the city of Patiala overflows, the incumbent Maharaja offers a traditional Nath, an ornament worn by women in their nose to the river following prayers made by priests. This was last...
Read More