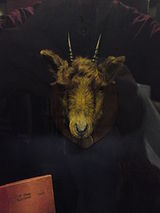 Description:
This is a chronological list of Manchester United F.C mascots from their foundation as Newton Heath F.C. in 1878. The current club mascot is "Fred the Red", an anthropomorphic "Red Devil", after the club's nickname, the Red Devils.

During the 1890s, readers of Newton Heath F.C. match programmes may have seen advertisements to hear "Michael the Bank Street Canary sing," for a nominal fee. However, Michael was not able to sing, and nor was he a canary. In actuality, Michael was a goose and was an unwitting participant in the money-making schemes that the club were using during their financial difficulties.

Understandably, the fans who had paid good money to hear a canary sing were rightfully unimpressed by Michael's tuneless honk. Then, one Christmas, Michael mysteriously disappeared, never to be seen again, believed to have been served as a dissatisfied fan's Christmas dinner.

Major was the prized Saint Bernard of Newton Heath's club captain and full-back, Harry Stafford, and played a pivotal role in the changing of the club's name, colours and stadium. Still in financial difficulty, Stafford would send his dog around the crowd with a collection box on its collar in the hope of bringing in much-needed extra funds. Then, in 1901, the club held a fund-raising bazaar, at which Major did his usual rounds with the collection box. However, the bazaar was a "rank...
Read More