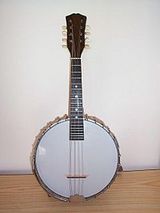 Description:
The mandolin-banjo should not be mistaken for the banjolin (which has only four strings), though their names are sometime interchanged. The mandolin-banjo is also known by its French name, "banjoline", but should not be confused with the Banjoline designed by Peabody. The manjo is also a popular nickname for the mandoline-banjo in Ireland. The instrument was popularized in the 1920s when musicians commonly amplified instruments to play more loudly.

In the heyday of mandolin orchestras and banjo bands (late 19th&ndash;early 20th century), all sorts of instruments were produced. The mandolin-banjo is one of the hybrids that resulted. It enabled mandolinists to produce a banjo sound without having to learn that instrument's fingerings. The instrument adds the banjo's volume to the mandolin; unlike the banjolin, the mandolin-banjo retains the mandolin-style stringing in courses (with double strings).

Mandolin-banjos have the same scale length as a mandolin (about 14 inches); the 4 courses are tuned identically to the violin and mandolin (low to high: GDAE). The movable bridge stands on a resonant banjo-like head typically 10 inches in diameter and currently usually made of plastic. Originally heads were made of skin and varied in diameter to as small as five inches. Larger heads were favored, however, as they were louder, and thus more audible in band settings.

Mandolin-banjos have been made by several companies, most notably Gibson, but also by the English company...
Read More