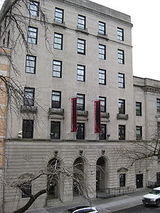 Description:
The Manhattan School of Music (MSM) is a major music conservatory located on the Upper West Side of New York City. The school offers degree on the bachelors, masters, and doctoral levels in the areas of classical and jazz performance and composition. With a faculty of 275 and over 800 students from 40 countries, the school also has a pre-college division which trains 500 students per academic year. Manhattan School of Music is considered one of the most prestigious conservatories of the study of music in the world.

Founded in 1917, the school is located on Claremont Avenue in the Morningside Heights neighborhood of New York City, adjacent to Broadway and W. 122nd Street. The MSM campus was originally the home to The Juilliard School, until Juilliard migrated to the Lincoln Center area of Midtown Manhattan. The campus of Columbia University resides close by, where it has been since 1895. Many of the students live in the school's residence hall, Andersen Hall. At the present time, 75 percent of the students come from outside New York State and 31 percent from outside the United States.

Admission to MSM is based primarily on a live audition. In 2005, MSM received 863 total applications, and admitted 287, for an overall acceptance rate of 33%.

The School was founded in 1917–1918 by Janet D. Schenck, pianist and philanthropist, as the Neighborhood Music School. It was located in a brownstone building on New York City's Upper East Side. Pablo......
Read More