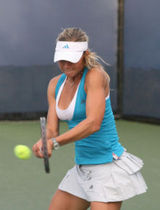 Description:
Maria Yuryevna Kirilenko (; born in Moscow on 25 January 1987) is a Russian professional tennis player. Kirilenko won her first WTA Tour title in 2005, defeating Anna-Lena Grönefeld in the China Open. Kirilenko reached 18, her career-high singles ranking, on the WTA tour in July 2008. She won the junior event at the 2002 Canadian Open, as well as the 2002 US Open junior tournament. She has reached one Grand Slam quarterfinal at the 2010 Australian Open. As of 4 July 2011, Kirilenko is ranked World No. 25.

She has been in a relationship with fellow Russian player, Igor Andreev for several years.

Maria Kirilenko started showing a passion towards tennis at age 5, but it was difficult to get practice in while still attending school. Her father enrolled her in a tennis school, and hours of training started to pay off as she won several tournaments.

When Kirilenko was twelve years old, an Honored Master of sports, Elena Brioukhovets, saw her while training. Brioukhovets watched Maria making progress offered to work with her. A three-year program was made and a special team was selected. In less than three years Maria became number one in her age group and number two in the 18 and under...
Read More