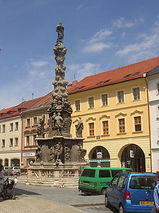 Description:
Marian columns are religious monuments built in honour of the Virgin Mary, often in thanksgiving for the ending of a plague or for some other help. The purpose of the Holy Trinity columns was usually simply to celebrate the church and the faith. However, the plague motif could sometimes play its role in their erection as well. Erecting religious monuments in the form of a column surmounted by a figure or a Christian symbol was a gesture of public faith that flourished in the Catholic countries of Europe especially in the 17th and 18th centuries. Thus they became one of the most visible features of Baroque architecture. This usage also influenced some Eastern Orthodox Baroque architecture.

Some other saints are also depicted on the plague columns. A typical one is St. Roch, who is said to have fallen ill when helping the sick during an epidemic of plague and who recovered through the strength of his faith. St. Sebastian, a martyr whose statue also often decorates these structures, was originally the patron of archers. In the Middle Ages Sebastian took the place of the plague-dealing archer Apollo, as people sometimes metaphorically compared the random nature of plague to random shots of archers, and thus he started being connected with the plague too. Other frequently depicted saints are St. Barbara, a patron of the dying, and two more recent and historical saints: St. Francis Xavier, who, according to the legend, raised people from the dead, and St. Charles Borromeo, known...
Read More