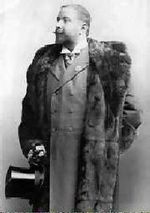 Description:
Mario Ancona (February 28, 1860 &ndash; February 23, 1931), was a leading Italian baritone and master of bel canto singing. He appeared at some of the most important opera houses in Europe and America during what is commonly referred to as the "Golden Age of Opera".

Ancona was born into a middle-class Jewish family at Livorno, Tuscany, on February 28, 1860. After embarking on a business career he decided to study voice with a local singing teacher named Matteini in his native city of Livorno. Later, he took lessons from Giuseppe Cima in Milan.

Ancona is reputed to have made his debut as an amateur singer as far back as 1880; but according to The Concise Oxford Dictionary of Opera—from which many of the ensuing appearance dates, venues and career highlights are taken—his earliest known professional appearance in an opera did not occur until 1889, when he sang the role of Scindia in Massenet's Le roi de Lahore in Trieste. Not long afterwards, he appeared in another Massenet opera, Le Cid, at Italy's principal theatre—La Scala, Milan. His arrival at La Scala so soon after his debut reflects the excellence of the technical grounding that he must have received as an amateur performer.

On May 21, 1892, Ancona was asked to create the part of Silvio in the first performance of Leoncavallo's Pagliacci, which took place at Milan's Teatro Dal Verme with Arturo Toscanini conducting. The next year, he appeared in the first London performance of Pagliacci at the...
Read More