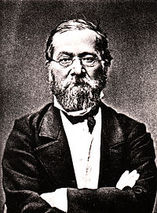 Martin Andreas Udbye was born in Trondheim, Norway to Ole Jonsen Tollrorskar Udbye (1785-1856) and Birgitte Øien (1781-1866). Udbye was employed as a teacher at Domsognets primary school in Trondheim, where he worked from 1838 until 1844 when he became the organist at Church Hospital in Trondheim. In 1851, Udbye took a trip to Leipzig, where he concentrated on organ and composition. The following year he was back in his hometown, where he was hired as a music teacher at the Trondheim Cathedral School.

Largely self-taught, he produced an impressive output of diverse and complex works including the first Norwegian opera, Fredkulla. Part of Norway's first opera was promoted locally in Trondheim during 1858 and met with enthusiasm.

Udbye's first attempt to present Fredkulla to the Norwegian national audience was thwarted in 1877 when the Christiania Theatre, where it was scheduled to be performed, closed due to fire. The opera was forgotten until NRK reconstructed material and produced a concert version on the radio to commemorate its centennial in 1958. The opera was performed as part of the celebration of the 1,000 year anniversary of the founding of Trondheim during 1997.