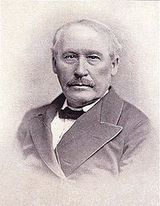 Description:
Martin Russell Thayer (January 27, 1819 – October 14, 1906) was a Republican member of the U.S. House of Representatives from Pennsylvania.

Martin Russell Thayer was born in Dinwiddie County, Virginia, near the city limits of Petersburg, Virginia. He attended the Mount Pleasant Classical Institute in Amherst, Massachusetts, and Amherst College. He moved with his father to Philadelphia, Pennsylvania, in 1837. He graduated from the University of Pennsylvania at Philadelphia in 1840. He studied law, was admitted to the bar in 1842 and commenced practice in Philadelphia.

Thayer was a commissioner to revise the revenue laws of Pennsylvania in 1862. He was elected as a Republican to the Thirty-eighth and Thirty-ninth Congresses, suring which he was the chairman of the United States House Committee on Private Land Claims. He declined to be a candidate for re-election in 1866, and resumed the practice of law.