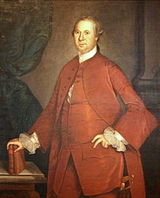 Description:
The Maryland Senate, sometimes referred to as the Maryland State Senate, is the upper house of the General Assembly, the state legislature of the U.S. state of Maryland. Composed of 47 senators elected from an equal number of constituent single-member districts, the Senate is responsible, along with the Maryland House of Delegates, for passage of laws in Maryland, and for confirming executive appointments made by the Governor of Maryland.

It evolved from the upper house of the colonial assembly created in 1650 when Maryland was a proprietary colony controlled by Cecilius Calvert. It consisted of the Governor and members of the Governor's appointed council. With slight variation, the body to meet in that form until 1776, when Maryland, now a state independent of British rule, passed a new constitution that created an electoral college to appoint members of the Senate. This electoral college was abolished in 1838 and members began to be directly elected from each county and Baltimore City. In 1972, because of a Supreme Court decision, the number of districts was increased to 47, and the districts were balanced by population rather than being geographically determined.

To serve in the Maryland Senate, a person must be a citizen of Maryland 25 years of age or older. Elections for the 47 Senate seats are held every four years coincident with the federal election in which the President of the United States is not elected. Vacancies are filled through appointment by the Governor. The...
Read More