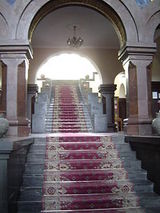 Description:
The Mesrop Mashtots Institute of Ancient Manuscripts ( Mesrop Mashtots'i anvan hin dzeṙagreri institut), commonly referred to as the Matenadaran (), is an ancient manuscript repository located in Yerevan, Armenia. It holds one of the world's richest depositories of medieval manuscripts and books which span a broad range of subjects, including history, philosophy, medicine, literature, art history and cosmography in Armenian and many other languages.

The earliest mention of the term Matenadaran, which means "repository of manuscripts" in Armenian, was recorded in the writings of the fifth century A.D. historian Ghazar Parpetsi, who noted the existence of a repository in Echmiadzin, where Greek and Armenian language texts were kept. Chookaszian, Babken L. and Levon Zoryan. «Մատենադարան» (Matenadaran). Soviet Armenian Encyclopedia. vol. vii. Yerevan, Armenian SSR: Armenian Academy of Sciences, 1981, pp. 284-286. After that, however, the sources remain silent on its status. In 1441, the Matenadaran was moved from Sis, the capital of the former Cilician Kingdom of Armenia, to Echmiadzin and stored in nearby monasteries.

In the course of the centuries following the dissolution of the Bagratuni Kingdom of Armenia in 1045, thousands of manuscripts were destroyed by the Turkic-Mongol invasions. According to the account given by Stepanos Orbelian, the Seljuk Turks were...
Read More