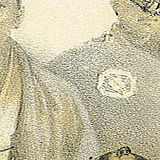 Description:
The was a Japanese clan which was granted the area around Matsumae, Hokkaidō as a march fief in 1590 by Toyotomi Hideyoshi, and charged with defending it, and by extension all of Japan, from the Ainu 'barbarians' to the north. The clan was originally known as the Kakizaki clan who settled Kakizaki, Kawauchi, Mutsu of the Shimokita Peninsula. Claiming descendence from the Takeda of Wakasa province, the family later took the name Matsumae. In exchange for their service in defending the country, the Matsumae were made exempt from owing rice to the shogunate in tribute, and from the sankin kōtai system, under which most daimyo (feudal lords of Edo period Japan) were required to spend half the year at Edo, while their families were, essentially, held hostage to prevent rebellion, spending the entire year at Edo.

Due to their location, and their role as border defenders, the Matsumae were the first Japanese to negotiate with Russia in any semi-official way. They might very well have been the first Japanese to meet Russians at all, within Japanese territory. In 1778, a merchant from Yakutsk by the name of Pavel Lebedev-Lastoschkin arrived in Hokkaidō with a small expedition. He offered gifts, and politely asked to trade. The Matsumae official tried to explain that he had no authority to agree to trade on behalf of the shogun and that they should come back the following year. The following September, the Russians did just that, according to some accounts misinterpreting what had...
Read More