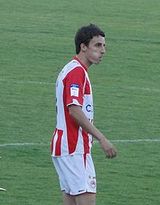 Description:
Matthew Anthony Derbyshire (born 14 April 1986) is an English footballer who plays for Olympiacos<!-- please don't remove without adding a reliable source to verify his leaving -->. He is a striker, who played for Blackburn Rovers for five years, and had loan spells with Plymouth Argyle, Wrexham and Olympiacos, before joining the latter club on a permanent basis in 2009. He played for Birmingham City on loan for the 2010–11 season. He won 14 caps for the England under-21 side.

Born in Great Harwood, Derbyshire joined his boyhood team Blackburn Rovers from local club Great Harwood Town in 2003 for a small fee, having scored 18 goals in nine appearances. He had previously worked in the club's community department, coaching young children. He rejected a move to Manchester United in favour of Blackburn as he felt his first team opportunities would be greater there.

He had a loan spell at Plymouth Argyle but did not manage to score in any of his 13 games, resulting in Mark Hughes ending the player's loan early. He then joined Wrexham on loan for the final three months of the season where he made a name for himself hitting the net on 10 occasions from 16 appearances.

He opened his senior goal account for the first team in a 3–0 against Wigan Athletic on 1 January 2007 before extending his tally further with the opener away to Everton in a...
Read More