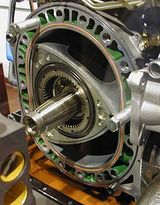 Description:
The Mazda Wankel engines (a type of rotary combustion engine) are family of car engines derived from experiments in the early 1960s by Felix Wankel, a German engineer. Over the years, displacement has been increased and turbocharging has been added.

Wankel engines can be classified by their geometric size in terms of radius (rotor center to tip distance, also the median stator radius) and depth (rotor thickness), and offset (crank throw, eccentricity, also 1/4 the difference between stator's major and minor axes). These metrics function similarly to the bore and stroke measurements of a piston engine. Displacement is 3√3radius·offset·depth, multiplied with the number of rotors (note that this only counts a single face of each rotor as the entire rotor's displacement). Nearly all Mazda production Wankel engines share a single rotor radius, 105&nbsp;mm (4.1&nbsp;in), with a 15&nbsp;mm (0.6&nbsp;in) crankshaft offset. The only engine to diverge from this formula was the rare 13A, which used a 120&nbsp;mm (4.7&nbsp;in) rotor radius and 17.5&nbsp;mm (0.7&nbsp;in) crankshaft offset.

Mazda rotary engines have a reputation for being relatively small and powerful at the expense of poor fuel efficiency. They are starting to become popular with kit car builders, hot rodders and in light aircraft because of their light weight, compact size, and tuning potential stemming from their inherently high power to weight ratio.

In auto racing, the...
Read More