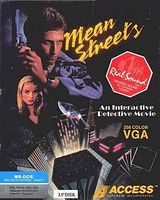 Description:
Mean Streets is a dystopian cyberpunk noir adventure game that was released in 1989 for MS-DOS, Amiga, Atari ST, and Commodore 64. It was developed and published by Access Software. The game is the first in the series of Tex Murphy mysteries; its immediate sequel is Martian Memorandum.

The player plays the role of Tex Murphy, a down-and-out private investigator living in post-apocalyptic San Francisco. Tex is hired by a beautiful young woman named Sylvia Linsky to investigate the death of her father, Dr. Carl Linsky, a professor at the University of San Francisco. Prior to his death, Carl would not talk to his daughter about the secret project he was working on, and days later, he was seen falling off the Golden Gate Bridge. Sylvia suspects murder, but the police say it was routine suicide. To help get him started, Tex is given $10,000 and a few leads. The player is referred to the game's manual for a list of their leads.

The game starts in Tex's speeder, and the player can perform various functions, including moving the speeder backward and forward, raise or lower the altitude, switching between different views, and accessing the on-board computer. The player can also contact Tex's secretary and informant and receive faxes from them if they ask for information on suspects.