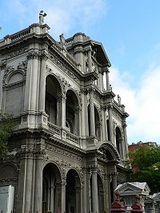 Description:
Medley Hall is the smallest residential college of the University of Melbourne in Australia. Established in 1954, it is situated on 48 Drummond St in Carlton, Victoria, away from other residential colleges in Parkville. It is home to approximately 60 students from around Australia and overseas. Medley Hall was named in honour of Sir John Dudley Gibbs Medley, a previous Vice Chancellor of the University of Melbourne.

Medley Hall has not be accepting applications for residency since 2009 due to construction work being carried out. It will be reopened in the middle of 2011 following the completion of the construction works.

The main building was originally called Benvenuta. It was completed in 1893 for Leah Abrahams, the widow of a small arms dealer. In 1925, Benvenuta was leased to the Commonwealth Government which transformed it into Arbitration Court Offices. Next, the mansion was converted into an Italian club, boasting a ballroom, orchestra and a regular Sunday boxing match, after a period of vacancy.

Benvenuta also has its share of dark history. A bullet hole in the stained glass 'Welcome' window at the top of the stairs is supposedly evidence of criminal activity occurring from 1938 when leased to a North Melbourne vigneron.

Benvenuta's ownership passed to the Italian Consulate prior to Italy's participation in World War II. After the war, Benvenuta was given to the University of Melbourne which then renamed it the Drummond Street Hostel.