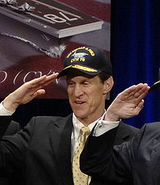 He is a minister, and leads the Office of Student Development, which oversees all student organizations at Wake Forest University in Winston-Salem, North Carolina. He is an alumnus of Wake Forest (BA, 1972) and Gordon-Conwell Theological Seminary (MDiv, 1984). He was the president of Sigma Chi while a student at WFU. President Ford, when he was still in Congress, spoke at his son's commencement.